Thoughts on Leadership With Bennet Simonton 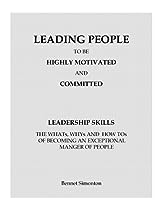 Bennet Simonton, author of Leading People to be Highly Motivated and Committed recently left a comment on pmStudent.com which I really enjoyed.

I really like the point he hit on with Theory X and Theory Y management styles.? I see Theory X as someone who relies on formal authority only to order people around, whereas in a Theory Y scenario people would follow their leader regardless of rank or formal status.? Theory Y is based mostly on respect and trust built up over time.? I believe my views are in accord with what Simonton is saying.

I’m curious, do you believe leaders can exist without being managers?? When I wrote that, I was thinking of a “thought leader” or someone similar who does not have management responsibilities, but succeeds in leading people or an organization through their influence on others, creativity and other contributions that impact strategy and direction.? An example would be a product developer in a small company who does not manage a team, but generates products and ideas which influence greatly the direction and strategy of the organization.? Another example is the front line employee who is a leader on their team using informal authority and through earning the respect and trust of their co-workers.

Let’s keep this conversation going!? Leave some comments with your thoughts.? Better yet, sign up to become a contributor to pmStudent.com here.? All are welcome!