Risk Management in the Snow

Filed under Risk | Posted by PMStudent

We had a LOT of snow over the Christmas holiday.? A LOT. 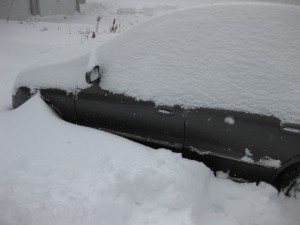 NOT the vehicle I drove around in!

Having barely made it out to my in-laws for my birthday celebration (and even more Christmas presents for my 3 spoiled sons) we stayed the night because it was getting worse and the snow plows weren’t going to be out until the next day in that area.

I wouldn’t have driven back on Saturday around noon but our dog Snickers needed to be cared for.? So I left the family safe and warm inside and I ventured out.

AND THEN IT HAPPENED.

No, I didn’t get stuck or slide into the ditch.? Fooled you!

I started thinking about the heightened level of risk all around me.? Looking at it from a project manager’s eyes who has always taken risk management seriously, I started to notice some things that were important to me in this risky situation.

In an area that gets a lot of snow, you have to be prepared.? Some years we don’t get a big blizzard at all.? Other years it can get pretty bad.

How do we mitigate this risk using equipment and materials?

As I was driving home, I made sure to leave a decent amount of space between me and the car to the front and side of me.? In case the vehicle on my side started to slide, I wanted to have plenty of room to react.? If possible I would speed up or slow down slightly so we were staggered and not directly across from each other.

The space in front of me was for 2 reasons.

All that buffer wouldn’t have done much for me if I wasn’t vigilant.? I had to be sure the channels of information flow were open so I knew immediately if something bad was going down, what it was, and in many cases respond with an action I had already pre-planned.

Finally I drove the truck in such a way to mitigate my risk of being on the road at such a lousy time.

There’s probably more that I just can’t think of right now.? (How about “not living in South Dakota” as a mitigation plan!)

So how does this relate to risk management on your projects?? How do you use data, equipment and materials, contingency, attention & feedback, and your method of operations to perform what I always like to call CONTINUOUS risk management?