A Tale of Two PMOs 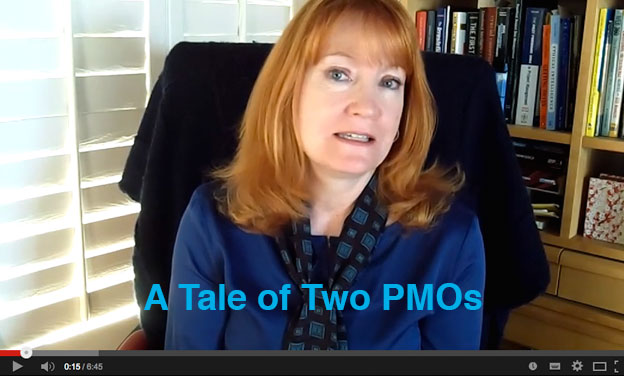 I recently came across a statistic that states that 50% of all Project Management Offices (PMOs) fail. It seemed high to me. But when I reflected on my own personal experience in setting up two different PMO’s I can tell you that my experience supports that statistic. One PMO was successful and one PMO was not. Of course two experiences is hardly a solid scientific sampling. None the less it has prompted me to bring you a tale of two PMOs.

The first PMO I was involved in had support from the very top. Our Executive Vice President was very much on board with the idea of the PMO. She could see that projects were floundering and she could see that each project was being managed differently and that this was leading to confusion. And so she tasked one of her directors with the creation of a project management office or PMO. In turn he brought in an expert in project management and an expert in PMO organization.  He selected some of the top project managers from the department and brought them into the PMO. Together they conducted research and went to seminars and hired the best consultants. Everything looked good.

The Vice President told all of her directors what was happening and how she expected their full support. They all enthusiastically declared that they couldn’t wait for the results. They were all very happy to know there was going to be a group of people who was going to help them run their projects more efficiently. At least that’s what they said in public. Behind the scenes the PMO team was having a different experience with those same executives. It seemed that most of those executives were too busy to meet with them to discuss plans and processes. It seemed that those executives didn’t have any resources available to meet with the members of the PMO. And when members of the PMO invited people to discussion sessions and training on project management methodology nobody showed up. When asked about their participation, every executive denied that they were refusing to participate with the PMO. They blamed schedules and resource constraints and said that the PMO was being unreasonable and so it went back-and-forth with no real progress or solution. Out of desperation the members of the PMO started working around the executives. They started going to some of the people who were running projects and who were new to running projects. They offered help. They offered mentoring and support.

By working directly with those who could benefit immediately with what they had to offer, the PMO began to experience some success. But alas it was too late. The bickering back and forth at the top level and the lack of progress lead to the dissolution of the PMO. The members of the PMO all learned an important lesson. We learned that company culture played such an important part in the success of a PMO. What we experienced was our own company culture. Our culture was nobody ever said no to something in public. Nobody said they wouldn’t do something or support something. They just did not do it. And if someone decided not to do something, nobody not even the Executive Vice President would make them do it.

Grassroots was the way in which we experienced some success. By grassroots I mean going directly to the people who are going to use what you’re creating and engaging with them and helping them and having them help create your processes and your methodology. And that leads to the tale of PMO number two.

A few years later at the same company a few of us who had worked on that first PMO found ourselves working together in another division. This division had a small PMO and they wanted it to grow. Surprisingly those of us who have participated in the first PMO were called upon to help. It was surprising because they knew our previous attempt had not been a success. We were called upon because we had the battle scars or lessons learned from the other PMO. We knew the company and we knew the culture. And use those lessons learned we did. We really socialized our PMO. We had an open house with games and suggestion boxes and of course fun food. We invited people to planning sessions, we walked around and spoke to all of the executives in informal and formal settings. We asked for their opinion, we asked for their feedback, and we did not announce or create any new policy without the involvement of the majority of the group. Was it a lot of work? You bet. Was it slower? Absolutely. But the time we spent doing this was time well spent.
It was part of the plan and part of the process. We didn’t make unrealistic deadlines for the growth of the PMO.

We created deadlines that assumed input from all concerned parties. We created drafts expecting people to come and tell us what they hated and what they loved. We assumed an attitude of “We are the PMO how can we help YOU succeed.“ Did we make everyone happy? Absolutely not. There were definitely some people who still did not trust us or the idea of a PMO and wanted to do things their way. Some of them came around, some did not. But in the end by working within our culture we were able to support projects and bring about positive change. And that was really the point.

If you are curious about PMOs and you are looking for ideas on how to move forward with a PMO (and also Project Portfolio Management), check out this free eBook from Keyed In Projects on Why PMOs Fail, http://www.keyedin.com/keyedinprojects/resources/ebook-why-pmos-fail

There is no reason for you to experience anything but success!