Normally I respectfully decline as I do not have the time to read and review the flood of books and software.? I was thinking however, that it might be fun to offer these up to you, the readers.? So going forward, I want to start making this possible.

Make Sure I Do it Right

Here’s how I see the benefits playing out: 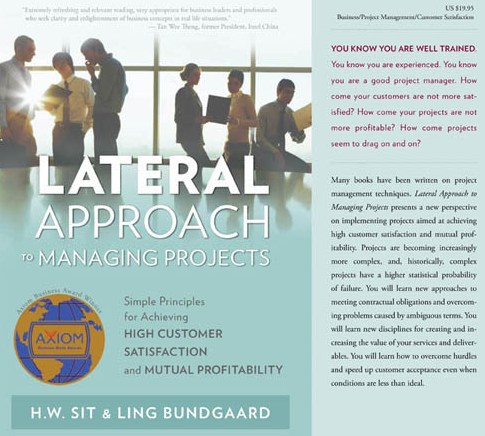 Lateral Approach to Managing Projects is a short business parable that follows Scott, a skilled Everyman project manager whose confidence is quavering against the irate accusations and demands of an unhappy client. After seeking the guidance of a benevolent mentor, Scott is reacquainted with essence of managing basics?create value, assert authority, empower clients. As intuitive as empathy and as fundamental as Dick and Jane, Lateral Approach to Managing Projects shows how simple it is to be influential.

Ho Wing Sit is the chief strategy officer of Accela, Inc., the industry leader in the production of government software for permits and licensing. He is currently working with Cisco to expand its government and higher education operations in China. Sit, an entrepreneur and inventor with four patents, holds an MBA from M.I.T. He lives in Moraga, Calif.

Ling Bundgaard is a global business expert.? She had a successful career as an executive at Intel Corporation for thirty-one years, during which she managed the start-up of their first manufacturing plant in Shanghai, China.? She also managed several large, cross-cultural projects in other countries, including the Philippines and Denmark.? She resides in Phoenix, Arizona. 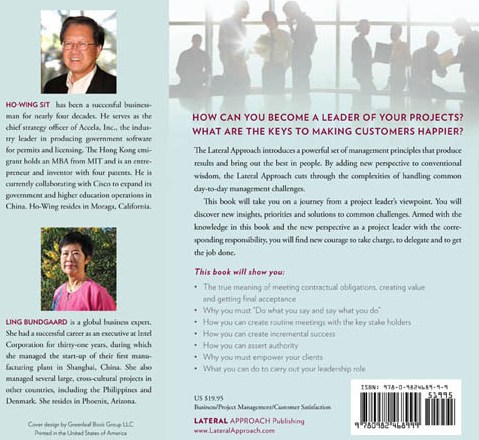 The publisher has agreed to make 5 copies available to pmStudent readers.? I would like to try a twitter contest to start with.? If you are not familiar with Twitter, please read this post I wrote about it.

Between now and December 25th, 2010 use the hash tag #pmStudent when sending out a pmStudent link or tweeting about pmStudent.

It doesn’t matter what the link is or what you say.? You could even be talking about how much you hate pmStudent, that still counts.? I don’t want to spread propaganda, just get you and others to be aware and having conversations about what you think.

I will use http://search.twitter.com and Tweetdeck as independent ways to tally the results.? The top 5 twitter users with the most applicable* tweets with the #pmStudent hash tag will be the winners.? I will contact the winners to arrange shipping.? If I do not receive a response before January 31, 2010 you will forfeit your book and I will start down the list until all of the books are given away.? I’ll give everyone at least 1 week to respond.

pmStudent receives no monetary compensation from the book publisher, authors, or their affiliated parties.