Ode to a Jedi Master – Who is your mentor?

Filed under Career | Posted by 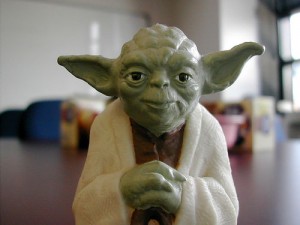 I learned more in two year under my mentor, Carl, than I did in the four years of college. Fortunately a major change occurred in my work place, which opened a huge opportunity that allowed me to work more directly with Carl. Right away he took me as his Padawan and started to challenge my abilities. He gave me his vision and set the standards high. This was my first big project of significant size and was a green project controller. He gave me the tools I needed to be successful and share his program management experiences.

Carl taught me many important lessons such as the importance of watching body language. Sometimes actions speak louder than words. He also showed me how to think at a micro-level, but then to present information to executives at a macro-level. Last but not least, the power of a high five after

nailing a planning drill translates into the power of having fun at work. He showed me that leadership can make all the difference in an ever changing program environment, because he led by example. Often he was the first one in the office and the last one to shut the lights off at night. Carl is sincere when he speaks, deliberate when analyzing any given situations, and most importantly he is a consistent leader.

Do you have a mentor that changed your career or taught you valuable lessons? Recognize those who make a difference by sharing your mentor stories.? Leave a comment!