Filed under Schedule | Posted by 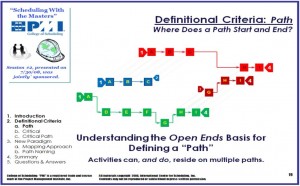 A fellow colleague of mine made me aware of this website. This concept and presentation made me think back to some of the schedules I?ve created in the past. Now I do not claim to be an expert on resource loaded network (RLN) development, but I can recall that I have seen on numerous occasions more than on critical path in my network. This meaning there were paths identified by the scheduling software tool as red and therefore critical, but not the longest path. Sometimes the path would start from the beginning and stop half way. Another path would start in the middle and the go to the end.? So I would spend a great deal of time trying to identify the true critical path only to do it again the next reporting period.

I am interested in hearing some academic/professional feedback on this topic.

See the following from The International Center for Scheduling, Inc. website.

As only the 2nd of six speakers chosen from around the globe, ICS founder Murray Woolf posed a thought-provoking question: has “Critical Path” become obsolete? In so many words, he contends that it has — and he even calls for retirement of the term, critical-path. His paper was delivered, via Internet, to a worldwide audience on July 30, 2008.

Perhaps it is time for ?Critical Path? to take a graceful bow ? and exit with dignity.? Perhaps its day has come!? To be sure, ?critical path? ? the words, the concept, and even the overarching project management approach to which it i?s central ? may have outlived its relevance.