Project leader? (Is he doomed?)

I tried to not indoctrinate him. 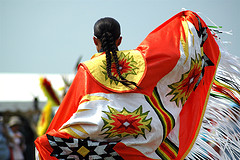 This week we went to a Wacipi, which is a Native American celebration.? These occur every so often in our area and are attended and put on by the local Lakota, Nakota, and Dakota tribal nations.

It’s great fun, and the kids really love it.? My wife noticed my oldest son doing what he normally does in large groups of kids…? Displaying some of the traits of a project leader.

There were 3 children playing who started a small ring, holding hands and dancing around the circle.? Mazaryk (my son) saw them and immediately ran over to join in the fun.

Soon, he decided that 4 just weren’t enough.? He saw the potential for a larger group and ran off to find other children and recruit them to the cause.? He went for all ages and ended up with children between 4 and 10 years old.

Soon, there were slightly over 20 children holding hands and dancing around this ring.? When the ring reached a certain point, Mazaryk stepped into the middle of the ring.

Then, he started looking after the ring of children.? If the chain broke, he rushed over to get the kids to hold hands again.? He alternated between direct participation and facilitation.? It seemed to me that his favorite part of the experience was making sure the ring kept going, and that the other children were having fun.? Overall, he had a great time like he always does when there are tons of kids and mass chaos to be put in order.

In a way all this made me a very proud dad.? In another way it made me sad.

Is my son doomed?

Doomed to be a project leader?