How Should You Structure Your Project Team 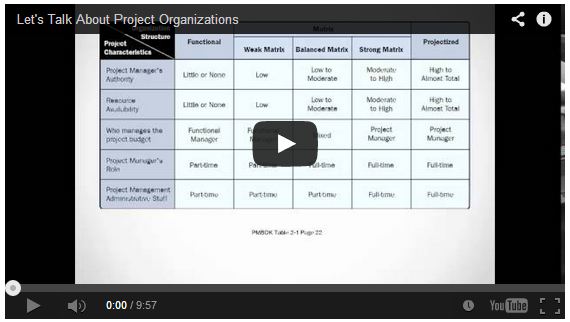 Let’s talk about project organizations. Project should be organized – the end. NO, not the end at all. Today we are discussing project organizations; plural as in what are some of the ways we organize our teams in order to meet our project objectives. Let’s take a look at some of the common ways that we typically organize project teams. These may not be terms that you walk around the office using, but I bet you will recognize these structures and you have probably already been using them:

These are the project organizations we are talking about!

Why use a functional organizational structure? It is easy and inexpensive. There is no team set up, no assignment of project managers, everyone works in place – as they were (so-to-speak). This is NOT the most efficient way to run a project. But if your company does not run projects very often or the project does not require a high degree of focus, this can be a very effective approach.

Projectized – The approach that does not pass most of our spell checkers, it is the opposite of a functional organization. When you use the projectized approach a special project team is created and everyone is 100% dedicated to the project. The project manager is king or queen and everyone reports to the project manager. The team works together until the project is completed. The project manager has a say in performance reviews. This is a faster and more efficient way to run a project. Nobody is distracted by other work efforts or called off to work on other assignments. (At least in theory.) Why not do this all of the time? It is expensive. If I take you from your job and put you on the projectized team, who is taking care of your other work? I’m probably backfilling with some kind of temporary worker to take over-year-old position. When the project is over I might have to find you work. A challenge is that sometimes when we bring in temporary workers we keep them because we get used to having the extra help and this means that the costs that we incur don’t really go away. Sometimes we also encounter a strange project disease called project-itis. A team with project -itis begins to think that they are the be-all end-all and that they are in fact the company. Maybe they begin to stick to themselves. They don’t reach out for information, they don’t share information and they begin to develop a little bit of an attitude. That’s a risk with the projectized organization, but it doesn’t have to be fatal.

We still need to discuss the matrix organization. There are actually three versions of the matrix, the weak matrix, the balanced matrix and the strong matrix. In a matrix, resources are on loan to the project and on loan to the project manager. The functional manager(s) lend the resources. The functional manager is the one who writes performance appraisals and is the ‘boss’ of the project resources (with the exception of the project manager who may report to a project director or someone else.) Team members are working on multiple efforts. These efforts could include other projects and also operational work. They are rarely 100% dedicated to any one effort.

As with the functional and projectized organizations the matrix has advantages and disadvantages of its own. It can be more difficult for team members to focus and to make their deadlines because they tend to be over allocated. People complain that they have too many bosses. (True because they are reporting to a functional manager and at least one project manager.) The matrix does allow for flexibility. It is not as expensive as the projectized organization because we ask people to work on projects and on operations. We assign people to multiple projects instead of having unique resources for each project. It is more efficient than the functional organization because we do form project teams and we have project managers to lead the projects.

Which organization is the best? This is a trick question. Each organization serves a purpose. The best one is the one that best suits what you need to accomplish. If you need something fast and you need everyone focused, you don’t want him or her to be working on multiple efforts. Then consider the projectized organization. If you don’t run projects very often and you don’t need to treat something like a special project use the functional organization.

I think that many of you recognize the matrix. It is just a matter of which matrix you recognize. The choice you make is all about the best way to meet your project objectives.