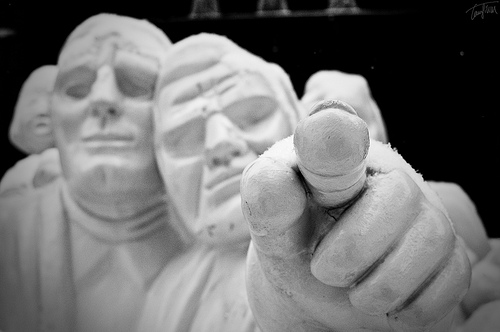 It’s something that gets a lot of lip service.

But are YOU doing it?

You will get all you want in life if you help enough other people get what they want.

Rob from Singapore asked a question about how to gain experience in project management when starting from the role of an individual contributor on projects. I posted an answer to that on a new experiment I have going on at pmStudent.org and I’ll riff on that now.

Be known as a person who over-delivers

If you are an individual contributor? on a project now, are you the kind of team member that everyone loves to work with?? Do people trust that you will deliver and even overdeliver on the work you are doing?

Strive to be the person who inspires others to say “Wow!? How does she/he get so much done?”? or “I hope I get to work with her/him on this project coming up.”

I’m not talking about under-promising

No, don’t set the expectations low so you can come in with your cape waving in the wind for an early delivery.? You’re not going to build any trust that way.

Expectations should be reasonable and realistic.

I’m talking about going above and beyond.? Do a top-notch job while volunteering your own unpaid time towards helping a project manager compile data.? It doesn’t have to be a lot, but it does have to be quality.? Spend a few less hours watching TV and invest in your own personal growth and reputation with your co-workers.

It’s not just about time

You don’t have to become a workaholic.? I once managed operations for a start-up wireless ISP, the first of it’s kind in the USA.? I worked myself to death, and although the work was great the work-life balance just wasn’t there.? It sucked.

Since then I have a 45-hour per week rule.? I’ve gotten very focused at personal productivity at work so that I can get everything I need to get done within that 45 hour period.

When a crisis happens though, I’ll work whatever I need to get the job done.? Sometimes it’s just a matter of staying a few hours late to finish a critical report for an early morning meeting the next day that JUST got scheduled a half hour ago.? Flex the time or just donate it.? Once it was a month of 60+ hour weeks to deliver a project on time that ran into a snafu towards the end.

Whatever it is, be the person who everyone knows they can count on when times get tough.? When someone has to take a clutch shot they throw the ball to you.

Don’t expect anything in return

You will get lots in return, but don’t expect it.? Many times you will not receive any recognition.? You will be passed by for that job you wanted.? It’s going to happen.? Do it for its own sake and when something else happens see it as a happy bonus.

A small example when it comes to networking is LinkedIn recommendations.? For every 10 sincere, time-consuming recommendations I write for others, I might get 2 in exchange.

I still provided an honest and thoughtful recommendation for someone who deserves it.